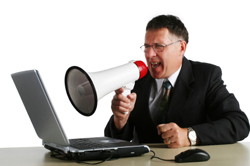 I got a request to do an interview but not via phone – which is how I'm used to doing them. It seems to me to be the best way to do them because what could be simpler than calling someone – or them calling me? The phone rings, I pick it up – and we converse. I like simple things over complicated things, especially when there doesn't appear to be any advantage to the complicated thing.

For example, swiping or pecking at a touchscreen to get a car's temperature control to go from warmer to cooler or to increase or decrease the fan speed – vs. turning a knob to achieve the same ends. I see no functional advantage to the former – and so regard the former as a kind of Rube Goldberg maze; a gimmick. A way to show cleverness that is arguably stupid as far as I am concerned. Stupidity defined as making something easy harder.

In the same vein, I got this request to do the interview and gave the requestor my phone number; at the appointed time, I was ready to ramble – but the phone didn't ring. So I emailed the contact and asked whether they needed to reschedule or was there a technical problem?

A reply came that asked me to click on a link to something called Zencaster, which I'd never heard of before. And didn't want to hear of.

Episode 057 – Transhumanism and You