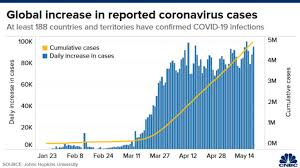 Update (1740ET): Building on Dr. Tedros's warning that the global outbreak was "accelerating", the WHO has reported the largest single-day increase in virus infections by its count, at more than 183,000 new cases in the last 24 hours. Brazil saw the biggest spike, contributing a stunning 54,771 cases, a new record daily total for any country, eclipsing the record 49k daily total reported out of the US back in April. With daily totals at or near record highs in more than a dozen states, the US was the second-largest contributor with 36,617.