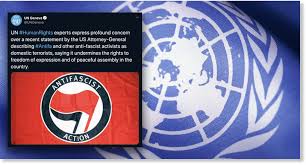 President Trump wants to label Antifa a terrorist organization, which he first announced late last month in response to mayhem unleashed related to the George Floyd protests, which in many cities included rioting, looting, and large-scale vandalism.

He had declared so via Twitter on May 31 in follow-up to Attorney General William Barr's statement at the time:  "The violence instigated and carried out by antifa and other similar groups in connection with the rioting is domestic terrorism and will be treated accordingly."

To the surprise of many, the United Nations has now issued a statement rebuking the White House attempt to impose the legal designation. Upon a UN statement being issued on Friday, counter-terrorism expert Max Abrahms at first thought it was a joke, but no it's not The Onion:

UN #HumanRights experts express profound concern over a recent statement by the US Attorney-General describing #Antifa and other anti-fascist activists as domestic terrorists, saying it undermines the rights to freedom of expression and of peaceful assembly in the country. pic.twitter.com/2Pz2dMyq8k