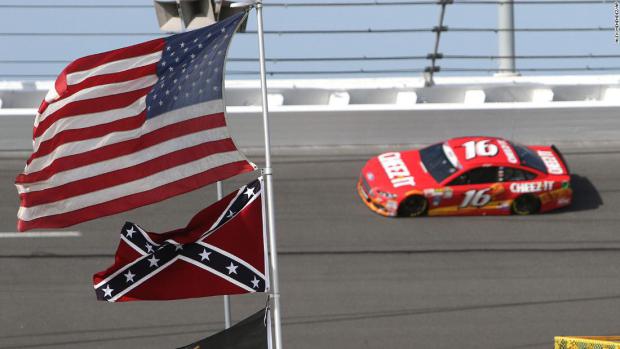 "It's just something that you're used to seeing at the racetrack," said Harmon, who grew up in Alabama and first drove in a NASCAR event in 1996. "It's like seeing a tree in your yard: It's just there, and you expect it to be there."

NASCAR's decision this month to banish the Confederate flag from its races and properties, instigated by the only black driver in its upper echelon, Darrell "Bubba" Wallace Jr., is testing the sport's ties to some of its fans.

A segment of them had already come to see NASCAR as too glossy, too corporate and devoid of stars whose daring driving is worth their hours and dollars. But the move is perhaps a path to greater diversity in a sport that has very little, a still-to-be-proved reversal of the motor sports empire's record of harboring racists and their tropes.

And in places like Alabama, a state that in the last five years removed the battle flag from the State Capitol grounds while also making protecting Confederate symbolism a matter of law, it may prompt another grass roots rethinking over an emblem enshrined in bigotry's history. Whatever will happen could begin to come into clearer focus on Sunday, when the Talladega Superspeedway — the fearsome track so close to Interstate 20 that ordinary drivers, limited to 70 miles per hour, sometimes hear the stock cars going 200 — hosts a NASCAR Cup Series race.

Why The Georgia Voter ID Law Is HORRIFIC

UK To Roll Out 'Covid Passports' For Sporting And Music Events