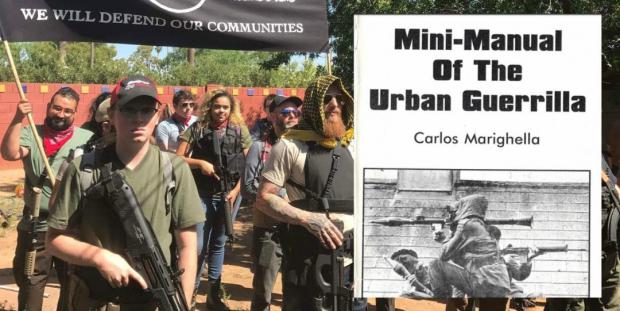 In their latest, Veritas has released footage of their 2018 infiltration into Antifa's Shelby, North Carolina self-described "above ground militant formation" known as Redneck Revolt, or the "John Brown gun club" - a 'militia wing' of Antifa founded in June, 2016 which claims to have 30 branches nationwide.

"They share the Antifa ideology and it can be shared by many different groups," said the journalist. "Typically, Antifa that you see on TV are the ones that are dressed all in black... You know, and they go and throw rocks or bricks and start trouble."

"This particular group sees themselves as armed revolutionaries. They're all about the working class. You know, so they share this communist anarchist ideal that the working class should run the country with no government. And they believe in total abolition of everything, including the police."

The group's outward facing mission is to oppose "white supremacy," while also espousing anti-capitalist, anti-wealth rhetoric with calls for "militant resistance" and "revolution," according to Far Left Watch. The group recruits at gun shows and community events, "contributing to the far left anarchist website It's Going Down, and conducting armed anti-Trump demonstrations."

Stand for Your RIGHTS!! How to Put a Criminal Cop in His Place!

The Antiscience Movement Is Escalating, Going Global and Killing Thousands

Are You Prepared For a "New Normal" of Flashmobs, Revolutionaries...