Getting Ready for Baby Animals on the Homestead 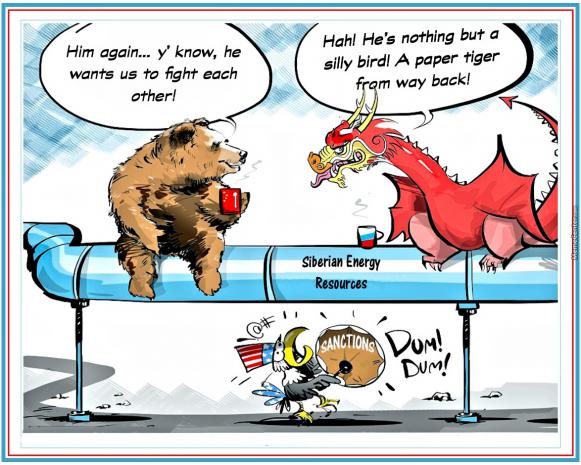 Russian hopes dashed: Whatever hopes Russian President Vladimir Putin may have had for a more workable relationship with the Trump administration have been "trumpled," so to speak.  This came through loudly and clearly in acerbic remarks by Russian Deputy Foreign Minister Sergey Ryabkov in an interview Friday with The National Interest.

Ryabkov lamented the sad state of Russia-U.S. relations, while pointing, not very subtly, to China as Russia's ace in the hole. He was simply acknowledging that what the Soviets used to call "the correlation of forces" has changed markedly, and strongly implied that the U.S. should draw the appropriate conclusions.

"We don't believe the U.S. in its current shape is a counterpart that is reliable, so we have no confidence, no trust whatsoever.  So our own calculations and conclusions are less related to what America is doing … we cherish our close and friendly relations with China. We do regard this as a comprehensive strategic partnership in different areas, and we intend to develop it further."

In other words: We Russians and Chinese will stand together as the U.S. tries to paint both of us as arch-villains, all the while isolating itself and painting itself into a corner.

Putin has come to accept that potent forces favoring high tension with Russia — the Military-Industrial-Congressional-Intelligence-Media-Adademia-Think-Tank complex (MICIMATT,  if you will) — are far stronger than any president; and that, in that context, trying to cultivate a relationship of personal trust with a president, may be largely a waste of time.

The system in which Putin spent his early life put a premium on what the Soviets called yedinonachaliya, meaning leadership by a person at the top who is fully empowered to make decisions and have them carried out by subordinates — or else. Putin's personal experience working successfully with President Barack Obama in early September 2013 to head off wider war on Syria [more on that later] may have deceived him into assuming that presidents of the United States can exercise that kind of power, at will. And, if that were the case, personal dealings at the very top were the preferred way to untie Gordian knots — and even cooperate for mutual advantage.

In the years since, the notion was fully dispelled that a U.S. president is completely "his own man" and is rather hemmed in by the MICIMATT — and particularly by its Security State component with entrenched, exceedingly powerful intelligence and law enforcement agencies.  President Donald Trump calls this reality the "Deep State."

The Fourth Estate Has Murdered America

Putin Seizes Moment to Rule Until He's 83 Amid Fading Popularity