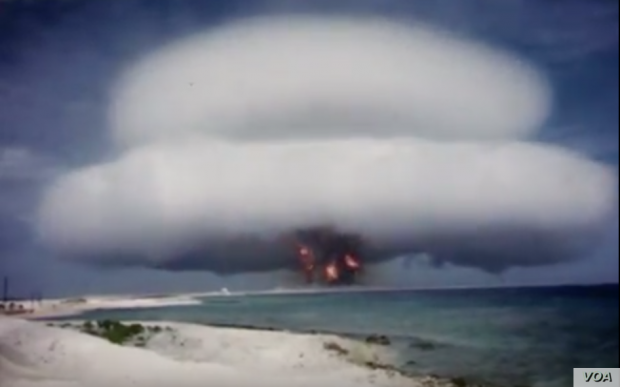 That is because it is still shrouded in secrecy, for the sake of protecting the presidential legacy of a man generally mis-designated as one of the ten "best" presidents of all time by people who self-identify as credentialed "historians," who are purposely ignorant of the incident because knowledge of it is not "politically correct."   The ironies abound, given that this incident was merely another – and not even the worst – of his treasons.

The documented facts (at least by the BBC and Al Jazeera, since no American MSM source ever investigated it) are that at 8:45 a.m. EDT (2:45 p.m. off the coast of the Sinai Peninsula) on June 8, 1967 two A-4 bomber aircraft loaded with nuclear bombs were dispatched from the aircraft carrier USS America, bound for Cairo with orders to drop those bombs on that city.[1]

It came on the fourth day of the Six-Day War between Israel and three of her neighbor states: Egypt, Syria and Jordan (the trio was known as the United Arab Republic – U.A.R., for their defense pact).  It was a war that had been planned for months, provoked and started by Israel but falsely blamed on Egypt. That war is still celebrated in Israel for how it resulted in expanding its borders; a sub-operation, to be examined below – the attack on the USS Liberty, which Israel had no real motive or reason to conduct – had been inserted by President Johnson for his own muddled political reasons.

Remember What It Is to be an American. And Let Freedom Reign Again.

What the Marxist Zeitgeist Has Wrought

Video: The dog who really can 'talk': Bunny the sheepadoodle presses buttons...

REVEALED: How Native Americans reached Polynesia 800 years ago by raft and interbred...