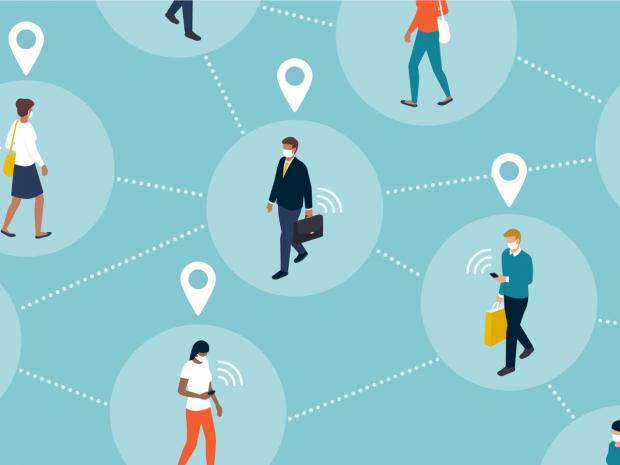 So I chose a state at random and started to look at their rollout of contact tracing. The first group I found—what were they? A non-profit, a government agency, a bunch of nameless robots with cushy jobs pulling down secure paychecks for the rest of their lives?

Finally, on their site, way down on a page, I saw references to a CEO. They're a company. A business. Their new money maker is hiring, training, and launching contact tracers.

They're collaborating with two other groups I've never heard of, and all three groups are plugged into state public health officials.

It's as if these people want to conceal themselves, or perhaps more accurately, distance themselves from the population, in their "vital work."
"Thanks for getting in touch with your question, Mr. Citizen. Actually, that contact tracing issue comes under the CVDR. You can contact them at their office. They may in turn refer you to the BGTD or the GKTH2V…"

Vagueness is the cardinal feature of the whole contact tracing program. Intentionally so. Words like "could" and "may" show up at key junctures. We could do this, we may do that.

For example, when some pleasant android of the State shows up at your home and knocks on the door, because you shopped at a hole-in- the-wall hardware store where an employee was later found to be "positive for," or "infected by," or "sick from" (which one is it?) the virus, and this contact tracer asks you about your health, and asks you to get tested, what happens if you say NO?

Dr. Scott Jensen Accused by the State of Spreading Misinformation

Hawaii: New Bill Would Give Health Director Power to Call a Health Emergency and Impose Quarantines

CDC SAYS, "COVID-19 MAY CEASE TO QUALIFY AS AN EPIDEMIC IN THE NEXT FEW WEEKS"

We've been scammed WHO now says "no evidence" of asymptomatic coronavirus...