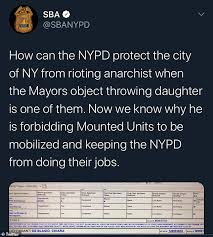 The mayor backed his daughter on Monday, saying he was proud of her