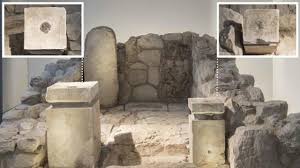 A well-preserved substance found in a 2,700-year-old temple in Tel Arad has been identified as cannabis, including its psychoactive compound THC.

Researchers concluded that cannabis may have been burned in order to induce a high among worshippers.

This is the first evidence of psychotropic drugs being used in early Jewish worship, Israeli media report.

The temple was first discovered in the Negev desert, about 95km (59 miles) south of Tel Aviv, in the 1960s.

In the latest study, published in Tel Aviv University's archaeological journal, archaeologists say two limestone altars had been buried within the shrine.

Thanks in part to the dry climate, and to the burial, the remains of burnt offerings were preserved on top of these altars.