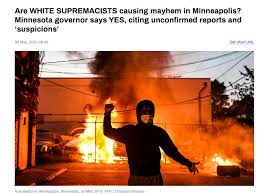 "The real hard-core guys, this is their job: They're involved in this struggle, they need protests on the street to give them cover to move in."

Of the 45 people arrested for rioting, unlawful assembly, stolen property, burglary or robbery on May 29 and May 30 so far, 38 had Minnesota addresses, according to publicly available jail records reviewed by FOX 9. Only six had out-of-state address, and one person didn't have address information listed.

Don't believe us? A searchable jail roster is available online.

So why would officials lie? (Gov. Tim Walz said Saturday morning that as many as 80 percent of the people were outsiders.)

Because the narrative breaks wide open if this is just locals losing their shit... and in fact many Minneapolis residents appear to be growing weary of the violence and destruction, while still supporting peaceful protests. Clearing rubble from a burned-out Walgreens on Saturday, Daniel Braun, 34, said he was sad to see the damage to his neighborhood.

Are YOU Willing To Disobey? | How Disobedience can SAVE Us