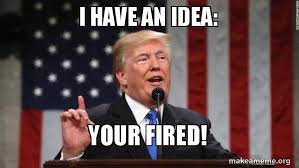 Trump to WHO: You're Fired! – President Donald Trump, outraged at the role the WHO played in helping China's communist government conceal the real nature of the Wuhan Virus for several months, took final action with that corrupt globalist organization on Friday, completely removing the United States from its membership:

"China has total control over the World Health Organization despite only paying $40 million per year compared to what the United States has been paying, which is approximately $450 million a year," Trump said during a news conference in the White House Rose Garden.

"The world needs answers from China on the virus. We must have transparency. Why is it that China shut off infected people from Wuhan to all other parts of China?" he added. "It didn't go to Beijing, it went nowhere else, but they allowed them to freely travel throughout the world, including Europe and the United States."

Naturally, RINO limp-wrists like Lamar Alexander were upset and disturbed by the move, because of course they were.