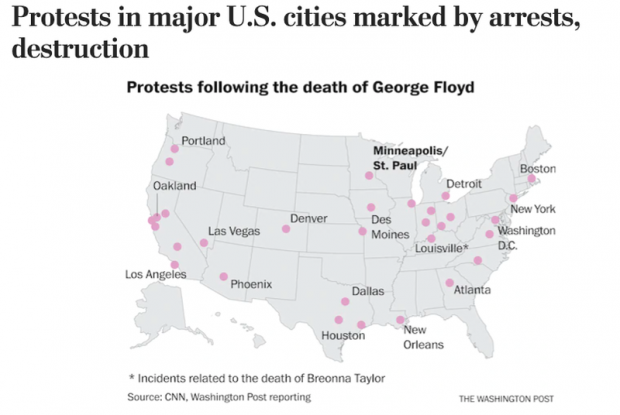 The president does not appear too nervous, tweeting moments ago that he has activated the National Guard in Minneapolis "to do the job that the Democrat Mayor couldn't do. Should have been used 2 days ago & there would not have been damage & Police Headquarters would not have been taken over & ruined."Meanwhile, NYC is going from bad to worse to downright "Joker."

Update (22:00 ET): Curfews are being imposed across the nation in response to the riots:

NOW LOOTING THE APPLE STORE IN THE GROVE SHOPPING MALL

Update (21:53 ET): A police officer in Jacksonville has been stabbed during a protest. According to WTSP, Jacksonville Sheriff Mike Williams said a protester stabbed one of his deputies in the neck and "many people have been arrested" in protests downtown Saturday. Authorities are warning the public to stay away from the downtown area as a protest continues against police brutality.