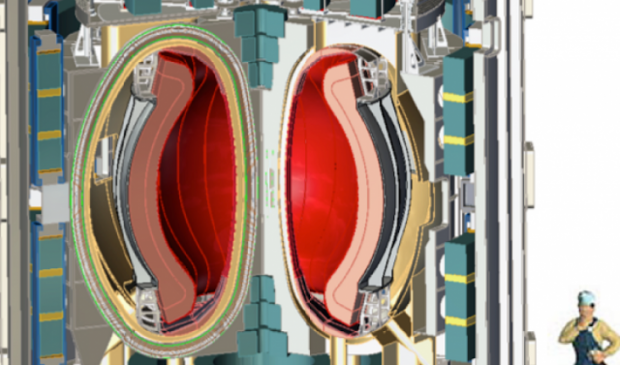 The work, published in an article in the journal Nuclear Fusion, helps better explain the relationship among three variables – plasma turbulence, the transport of electrons through the plasma and electron density in the core. Because these factors are key elements of the fusion reaction, this understanding could significantly improve the ability to predict performance and efficiency of fusion plasmas, a necessary step toward achieving commercial fusion power plants.

They confirmed low collisionality improves electron density peaking through the formation of an internal barrier to particle movement through the plasma, which in turn altered the plasma

"We've known for some time that there is a relationship between core electron density, electron-ion collisions and particle movement in the plasma," said William & Mary's Saskia Mordijck, who led the multi-institutional research team at DIII-D. "Unfortunately, until now research has not been able to untangle that relationship from the other components that affect electron density patterns."

DIII-D, which General Atomics operates as a national user facility for the Department of Energy's Office of Science, is the largest magnetic fusion research facility in the country. It hosts researchers from more than 100 institutions across the globe, including 40 universities. The heart of the facility is a tokamak that uses powerful electromagnets to produce a doughnut-shaped magnetic vessel containment for confining a fusion plasma. In DIII-D, plasma temperatures more than 10 times hotter than the Sun are routinely achieved. At such extremely high temperatures, hydrogen isotopes can fuse together and release energy.

turbulence. Previous work had suggested the effect might be due to plasma heating by neutral beam injection, but the experiments show that it was linked to particle transport and turbulence.

ANOTHER fire breaks out at a power station in Iran following a string of explosions...

Remember What It Is To Be An American. And Let Freedom Reign Again

A Will To Overthrow The United States