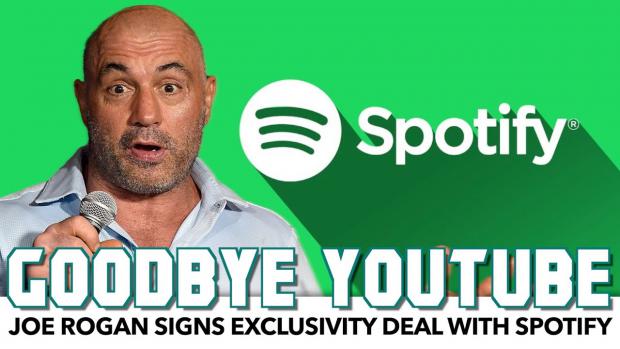 The comedian's landmark shift away from the Google-owned streaming service could signal the start of a wave of creators moving away from the site – as it bafflingly attempts to pander to legacy media.

If you know podcasts, you know Joe Rogan. The American comedian has been producing his Joe Rogan Experience for more than a decade. He began just recording himself and his fellow comics shooting the breeze and smoking some weed before and after gigs.

Fast forward ten years and he has one of the biggest talk shows on the planet with presidential candidates, Hollywood megastars and billionaires queuing up to join him in the studio. The show has such enormous sway that it even managed to affect the price of Tesla stocks after Elon Musk took a toke on a joint during an interview.

In view of all this, it is perhaps not surprising that Spotify have just wooed the former Fear Factor presenter away from YouTube after writing him a cheque for a rumoured $100 million. That is proper, box office megabucks. To put it into context, that is more than Dr Phil, Howard Stern, Rush Limbaugh, Ellen DeGeneres and Ryan Seacrest were valued at last year by Forbes Magazine in their top five list of "World's Highest Paid Hosts".

This, on top of his always sold out arena tours as a comedian, his long-running deal with Netflix to screen his specials and his role as a colour commentator for the UFC have made Rogan a staggeringly wealthy man, and all from just talking.

Since its inception, the Joe Rogan Experience's home has been YouTube. His channel, "PowerfulJRE", has more than eight million subscribers and he pulls in around 400 million views a month. But despite these outrageous numbers and his ludicrous success on the medium, Rogan has decided to leave the platform. While he will keep updating his JRE Clips channel, which shows 5-15minute clips from his shows, his flagship multiple-hour broadcasts will be made available exclusively to Spotify.

Announcement: the podcast is moving to spotify!
Starting on September 1 the podcast will be available on Spotify as well as all platforms, and then at the end of the year it will move exclusively to Spotify,… https://t.co/7IRHET5eZo