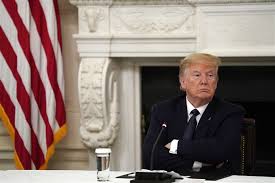 Trump claimed incorrectly, "Michigan sends absentee ballots to 7.7 million people ahead of Primaries and the General Election. This was done illegally and without authorization by a rogue Secretary of State."

Michigan's Secretary of State replied to the president on Twitter: "Hi! I also have a name, it's Jocelyn Benson. And we sent applications, not ballots. Just like my GOP colleagues in Iowa, Georgia, Nebraska and West Virginia."

The president threatened to "hold up funding to Michigan if they want to go down this Voter Fraud path!"

Nevada and Michigan are considered swing states in the 2020 General Election. Trump narrowly defeated then-Democratic presidential candidate Hillary Clinton by 47.50% to 47.27% in Michigan in 2016. Clinton won Nevada by 2% in the 2016 election.

Trump tweeted a similar threat to Nevada, "State of Nevada 'thinks' that they can send out illegal vote by mail ballots, creating a great Voter Fraud scenario for the State and the U.S. They can't! If they do, 'I think' I can hold up funds to the State. Sorry, but you must not cheat in elections."