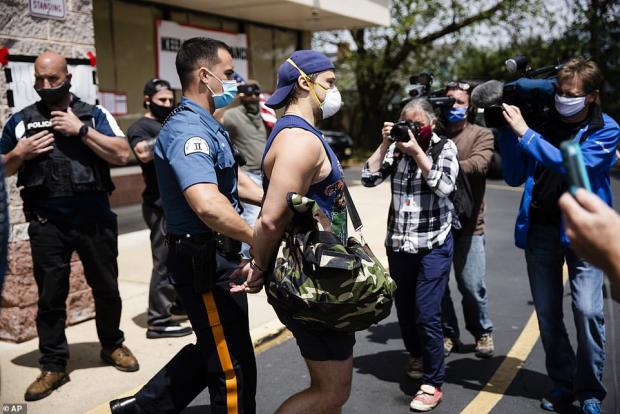 A New Jersey fitness enthusiast has been arrested after he went to work out at a gym that opened in defiance of the state's stay-at-home order.

The gym goer, who has not been named, was pictured in handcuffs and being taken into custody outside Atilis Gym in Bellmawr Tuesday, while the facility's co-owners Ian Smith and Frank Trumbetti were issued summonses by police officers ordering them to close.

The move attracted attention across New Jersey and the gym opened its doors to crowds of supporters for the second day in a row Tuesday.

Bellmawr police issued Smith and Trumbetti with summonses soon after it opened Tuesday, marking the second summonses handed down in as many days at the gym.

One gymgoer - wearing a face mask and a vest that read 'Only you can prevent dad bods' - was seen being led away in handcuffs by officers.