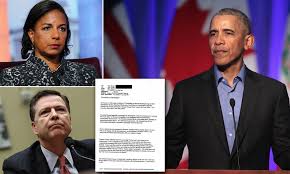 According to The Federalist, "In the email, portions of which were not declassified until recently, Rice recorded that Flynn, who at the time was the incoming national security adviser for Trump, was personally discussed and targeted during the meeting with Obama."

"Comey said he does have some concerns that incoming NSA Flynn is speaking frequently with Russian Ambassador Kislyak," Rice wrote too herself in a now-declassified portion of the letter, adding "Comey said that could be an issue as it relates to sharing sensitive information."

"President Obama asked if Comey was saying the NSC should not pass sensitive information related to Russia to Flynn," the email continues. "Comey replied 'potentially.'"

"[Comey] added that he has no indication thus far that Flynn has passed classified information to Kislyak, but he noted that 'the level of communication is unusual,'" Rice wrote - which The Federalist points out does not explain how it would be "unusual" for an incoming national security adviser to hold discussions with foreign leaders prior to the inauguration.

Many observers believe the calls between Flynn and Kislyak were little more than pretext to hide the Obama administration's spy campaign against Trump from the newly elected president's team and to justify a continued inquisition against Flynn.