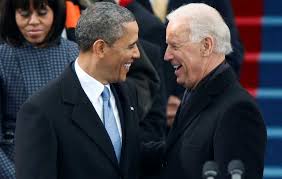 'It was the greatest political crime in the history of our country,' Trump said

During a wide-range interview with Fox Business, he called Flynn a 'hero'

Hours later he followed up with a tweet claiming he was elected because Obama and Biden were the most 'corrupt' administration in U.S. history

'The Obama Administration is turning out to be one of the most corrupt and incompetent in U.S. history,' Trump asserted on Twitter

'Remember, he and Sleepy Joe are the reasons I am in the White House!!!'

Trump claimed he had not heard the comments, but told reporters when returning to the White House Sunday afternoon that Obama is 'incompetent'

'People are dying this way too,' he told Fox Business' Maria Bartiromo during a pre-recorded interview outside the White House with Sunday Morning Futures