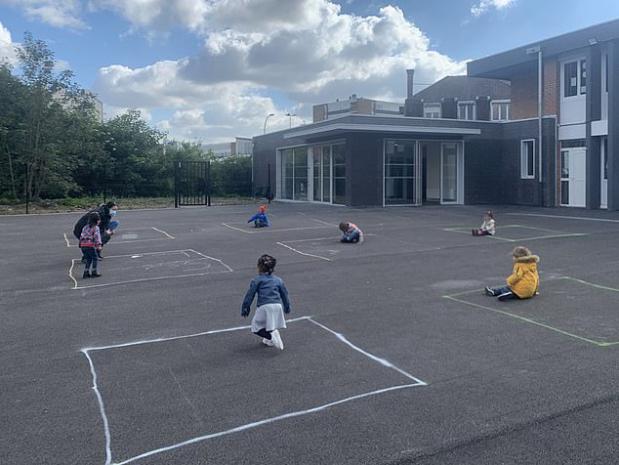 A heart-breaking photograph of nursery school children forced to play in 'isolation sections' in French schools has caused shock and outrage.

The photo, taken in the town of Tourcoing on the border with Belgium, shows boys and girls forced to stay away from each other inside areas marked out with chalk.

It comes after three and four-year-olds were allowed to return to classes following two months of lockdown after the French government eased restrictions this week.

'I can't get over this,' said historian Laurence De Cock, who posted the picture on Twitter. 'This image is heartbreaking. We can't call this "school".

Lionel Top, a TV journalist with the BFM news channel, took the photo on Tuesday and said the children had been told to stay in their zones.

Two other photos showed children lining up for lessons by standing or sitting on crosses spray-painted on the floor, and separated in classrooms by tape.

'To ensure respect for distances, while taking advantage of recreation, the teaching team drew squares on the ground for the little ones,' he reported.