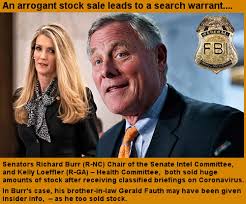 Republican Sen. Burr, of North Carolina, surrendered his phone to federal agents after they served a search warrant on the lawmaker at his Washington home

Burr, the chairman of the Senate Intelligence Committee, sold a large percentage of his stock portfolio in February shortly before the market slumped

Across 33 different transactions on February 13, Burr sold off between $628,000 and $1.72 million of his holdings, following coronavirus briefings

The Davos Agenda and The Rise of China