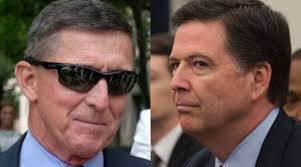 Or is it the earlier version, the NKVD, whose leader Lavrentiy Beria famously declared "Show me the man and I'll find you the crime."

James Comey - the head of the FBI during this period of extraordinary moral turpitude - never said anything anywhere near that pithy or memorable but he did Beria one better. He, with Peter Strzok, whose feckless emails to his paramour continue to amaze, and various other bit players - some revealed others yet to be revealed - of this sorry saga, didn't just find a crime, they invented one.

In all fairness, the Soviets, pre and post-Beria, often did the same, putting the darkness in "Darkness at Noon" with forced confessions as in the Metro-Vickers Affair (1933) when innocent Brits took the hit for the failure of Stalin's "Five-Year Plan."

What was really going on with what was essentially the "forced confession" of Michael Flynn?