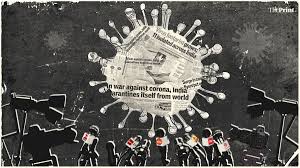 The fog of war against the novel Corona virus is as dense as any Americans have seen, comparable to that associated with Woodrow Wilson's poorly understood and unpopular drive to war in Europe, finally succeeding by the late halfway point in April 1917.

Wilson took office just after the ratification of two dangerous amendments to the Constitution, the 16th and the 17th.  I meant to say dangerous to the republic, but they signaled the coming death knell of the Constitution itself.  Wilson oversaw the formation of the Federal Reserve in his first year in office, an associated concept, along with mass democracy and centralized confiscation of wealth, well-suited to dictatorships, empires, and fascisti.

The Constitution does serve as a barometer of an empire doomed to eventual collapse, with its empty words and phrases, its literal nothingness held up only to illustrate how far the republic has fallen.

You've got a friend in me!

Waste of Time to Test Says Mexico as 50% Test Positive