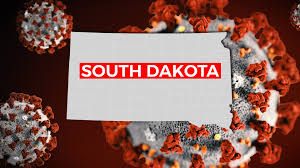 South Dakota Governor Kristi Noem accused Americans across the nation of giving up their 'liberties for a little bit of security', vowing to go against the grain and keep her state open as protests against lockdown orders are staged nationwide.

Infections in the state have trebled in just one week and is home to one of the country's largest virus hotspots following an outbreak at a pork processing plant.

At the start of the month there were only 129 infections in the state but, as of Thursday, 988 cases have since been confirmed and six deaths reported.

Despite the alarming surge of COVID-19 cases in such a short space of time, Noem insists she still had no plans to implement a lock-down.

The controversial Governor assured critics that she will continue to make decisions based on 'science and 'facts', 'rather than letting emotion grab a hold of the situation.'

She argued that it was up to individuals - and not governments - to decide if they should go to work, worship or stay at home.

'I took an oath when I was in congress, obviously to uphold the constitution of the United States. I believe in our freedoms and liberties,' Noem said in an interview with FOX News.