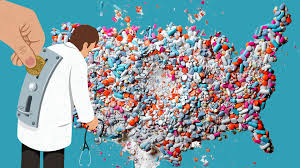 This article will demonstrate that he is no longer in control. His supposed underlings are undermining his authority. In particular, the Democratic governors are blocking Trump's endorsement of anti-viral drugs to treat COVID-19 because profits do not flow back to his underlings, who have blatant conflict of interests and in particular, Bill Gates, and the vaccine empire. Further, Trump's underlings, Fauci in particular, are publicly berating the President and the President seems unable to do anything about it except to say these people should be fired. Even if Trump rediscovered his Presidential backbone, it is too late. We have reached over 50% unemployment. The stimulus is like bailing out the Titanic with a teaspoon and will not stave off the planned Greatest Depression. Famine is in our future, as has been repeatedly demonstrated in past articles on the CSS. The MSM has successfully blamed Trump for the crisis and soon, he will not be electable. All of social media heavily censors any contrary facts to this coup's cover story, such as the fact that EVERY person on the COVID-19 team has a major conflict of interest which is fed by vaccine profits. Even the President's allies, such as Sen. Ron Johnson, cannot seem to motivate the President to action. At the time of this writing, it is difficult to absolutely pinpoint when the President's administration was hijacked, but it is apparent. for all who have eyes to see, that is exactly what has happened.