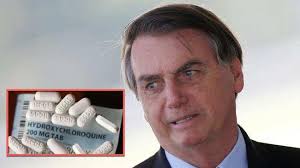 "We have more good news. As an outcome of my direct conversation with Prime Minister of India, we will receive, by Saturday, raw materials to continue our production of HCQ so that we can treat patients of COVID-19 as well as of Lupus, Malaria, and Arthritis. I thank Prime Minister Narendra Modi and the people of India for such timely help to the people of Brazil," Bolsonaro stated.

"An honorable gesture that can help save the lives of many Brazilians, and which we will never forget," Bolsonaro added.

HCQ is an anti-malarial drug that has been commonly used to treat lupus, arthritis, and other disorders which has been touted by President Trump. While clinical studies of the drug are still pending, there is compelling anecdotal evidence of the drug's efficacy when combined with azithromycin (Z-Pac) and zinc sulfate has caused several countries to place them on their recommended treatment regimen for the virus.

The Brazilian president said the drug's effectiveness against the virus "could go down in history as having saved thousands of lives in Brazil." This comes at a time when the South American country has recorded 18,176 confirmed cases and 957 deaths (as of Friday morning, April 10).

Bolsonaro said, "doctors, researchers, and heads of state from other countries" have told him that the drug had been used to treat "dozens of patients" and "all of them were saved."