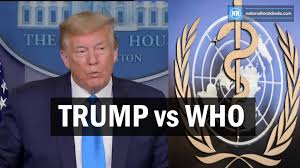 WHO Director-General Tedros Ahanom Ghebreyesus also opposed Trump's late-January travel ban, saying "We reiterate our call to all countries not to impose restrictions that unnecessarily interfere with international travel and trade. Such restrictions can have the effect of increasing fear and stigma, with little public health benefit."

"We're going to have an announcement on the World Health Organization some time next week," said Trump during a Friday press conference. "As you know we give them approximately $500 million a year and we're going to be talking about that subject next week. We'll have a lot to say about it. We'll hold it," according to Bloomberg.

Trump added that he didn't want to make an announcement on Good Friday or before Easter.

As Trump endures scrutiny of his government's response to the U.S. outbreak, some of his political allies have alleged the WHO was too trusting of Chinese assertions about the disease after it first appeared last year. Senator Lindsey Graham, a South Carolina Republican, has said he would block further U.S. funding for the international health group until it changes its leadership, calling the agency "deceptive" and "Chinese apologists" in a Fox News interview on Tuesday.

Trump echoed some of that criticism Friday, saying the organization has been "very China-centric" and that he did not believe it was "fair to the American people." -Bloomberg