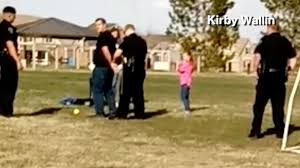 A 33-year-old Colorado man was handcuffed in front of his wife and 6-year-old daughter for allegedly violating a social distancing order.

33-year-old Matt Mooney said his young daughter was terrified the police were going to arrest him after the cops swarmed his family.

The father reassured his daughter they were doing nothing wrong by playing tee-ball in the park, however the police cuffed him in front of the little girl.

Matt Mooney feels Brighton police owe him a huge apology. The 33-year-old says he was handcuffed at Donelson Park in front of his 6-year-old daughter Sunday afternoon after police told him he violated the state's social distancing guidelines.

Mooney told the FOX31 Problem Solvers he refused to provide his identification to three police officers because he was confident he wasn't doing anything unlawful by playing tee-ball with his wife and daughter at the park.

"She's like, 'Daddy, I don't want you to get arrested.' At this point I'm thinking, 'There's no way they're going to arrest me, this is insane.' I'm telling her, 'Don't worry, Daddy's not going to get arrested. I've done nothing wrong. Don't worry about it,' and then they arrest me."