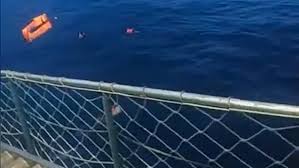 Shocking footage captures panicked ferry passengers leap into the water after being told some of those on board have been infected with coronavirus.

KM Lambelu, an Indonesian ferry, was denied permission to dock at the port of Maumere after crew members displayed symptoms of Covid-19.

And when this was announced, five worried passengers threw themselves into the water in order to try and swim to shore.

They took life vests with them, and were later picked up by rescuers who confirmed none of the five were suffering from any injuries after falling into the water.

Footage, which has been shared on social media, shows their plunge.

The ship was later allowed to dock and medical staff in full hazmat gear were seen going aboard and carry out tests on passengers and crew before they were moved to quarantine on land.

Transport ministry spokesman Wisnu Handoko appealed for the remaining passengers to "be calm and to cooperate with all the health regulations in order to be allowed to disembark from the ship in a safe way".