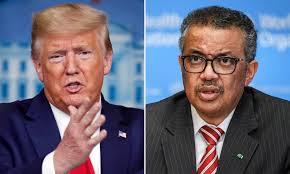 The head of the World Health Organisation issued a tacit threat to President Trump Wednesday, after the latter threatened to withhold funding for the organisation owing to its slow response to the coronavirus spread, and what Trump described as a 'China-centric' outlook.

In his Wednesday press briefing, Trump followed up, stating 'The WHO got it wrong, they got up very wrong. In many ways they were wrong. They also minimized the threat very strongly,"

He also blasted WHO chief Dr. Tedros Adhanom Ghebreyesu, calling him one of China's 'proxies'.