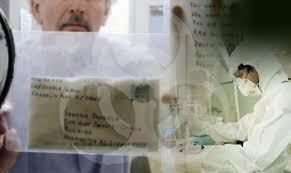 Dark Winter not only predicted the 2001 anthrax attacks, but some of its participants had clear foreknowledge of those attacks.

During the presidency of George H.W. Bush in the early 1990s, something disturbing unfolded at the U.S.' top biological warfare research facility at Fort Detrick, Maryland. Specimens of highly contagious and deadly pathogens – anthrax and ebola among them – had disappeared from the lab, at a time when lab workers and rival scientists had been accused of targeted sexual and ethnic harassment and several disgruntled researchers had left as a result.

In addition to missing samples of anthrax, ebola, hanta virus and a variant of AIDS, two of the missing specimens had been labeled "unknown" – "an Army euphemism for classified research whose subject was secret," according to reports. The vast majority of the specimens lost were never found and an Army spokesperson would later claim that it was "likely some were simply thrown out with the trash."

An internal Army inquiry in 1992 would reveal that one employee, Lt. Col. Philip Zack, had been caught on camera secretly entering the lab to conduct "unauthorized research, apparently involving anthrax," the Hartford Courant would later report. Despite this, Zack would continue to do infectious disease research for pharmaceutical giant Eli Lilly and would collaborate with the U.S. National Institute of Allergy and Infectious Disease (NIAID) throughout the 1990s.