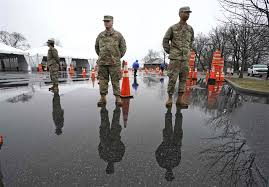 The day has arrived when freedom has ceased to exist in this country. It still remains a state of mind for those in the masses that have little ability to think critically or to see the reality staring them in the face. This is symptomatic of a population in mental turmoil, this brought about by long-term indoctrination leading to mass ignorance and blind nationalism. The tyrants of all past history must be smiling as they look upon the United States today, a perfect totalitarian storm of two classes. One is the political elite and powerful, and the other is the rest of society; weak and dependent on their masters. Once any country's people succumb to obedience, all that is left is slavery.

A time has come when all are told where they may go, what they are allowed to do, what they may purchase, what medical care they may or may not receive, how long they must remain in home prisons, and soon they will be told they are required to vaccinate with poison delivered by partners of the criminal state. Control over the population is almost complete, as government is stripping all individuality by eliminating or controlling by force our culture, religion, and independent views and thought, in order to bring about a new order. This order will be a top-down controlling governing system, and one that relies on a frightened and obedient populace. Life as we have known it will cease to exist, as total control of every aspect of societal behavior and economy will be executed by the few while all others remain in a cage of oppression.