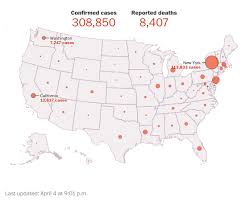 And despite the more than 308,000 cases and 8,407 deaths, Americans continue to defy the stay-at-home government enforced orders that cover 90% of the country.

"In California, where a stay-at-home order took effect March 19, daily trips statewide remain at 58% of normal levels, according to Wejo, a British company that collects data from sensors in some passenger vehicles.

On Wednesday - two days after the District of Columbia, Virginia and Maryland enacted stay-at-home orders - daily car trips in the region remained at 51% of normal in D.C., 53% in Maryland and 59% in Virginia, according to Wejo, which does not include trucks or other commercial vehicles.

Washington state officials announced a stay-at-home order March 23. More than a week later, distances traveled on Seattle roads remained at about 55% of normal, according to INRIX, a Kirkland, Washington-based traffic analytics firm that crunches data from vehicle navigation systems, cellphones and other devices," reported The Post.