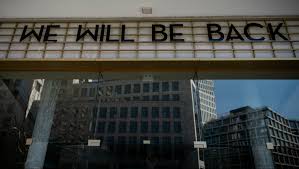 , if not the world - is fast emerging as the most generous provider of government stimulus, and this morning we got confirmation of that when Angela Merkel's government announced a new "limitless" aid program for small- and medium-sized companies (note: not a bailout of Germany's mega corporations) as part of an effort to support Europe's largest economy in the coronavirus pandemic.

Merkel's government will provide guarantees of as much as 100%, German Finance Minister Olaf Scholz announced at a joint press conference with Economy Minister Peter Altmaier Monday, Bloomberg reports, adding that loans of up to 800,000 euros ($862,000) that will pay out very quickly will be available.

The existing program only provides for an 80% to 90% loan guarantee and banks have been reluctant to take on new risk as the economy falters. Private lenders have thus pressed the government to expand the existing program by guaranteeing 100% of the loans, which it now appears to be doing.

So... SBA are you listening?