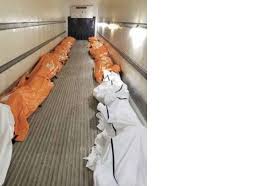 At the very end of last year, I wrote a New Year's piece entitled "America is Over But You Knew That Already", whereby various "cracks and water in the nation's foundation" were explored.  In that article, I said:  "winter is finally here" along with these words:

Exactly how and when America's foundational stones will shatter in the coming months is anyone's guess, but do know this:  When Progressive Democrats, and an activist mainstream media, stage a third-world impeachment trial of a U.S. President while reverently citing the words of the nation's long-dead founders who were, by their own definition, privileged white males and racist slave owners – the end is nigh.

In a later article, six reasons were explored as to why the COVID-19 virus failed "the sniff test" along with the coincidental timing that marked the rise of the virus:

…[the first COVID-19 death outside of China] was one day before the Iowa Caucuses were held (2-3-2020) where the results were massaged to raise Mayor Pete over Bernie and bump Biden to the bare minimum viability.

It was also two days before the Diamond Princess cruise ship was quarantined in Japan … and three days before Trump was acquitted in the Senate.