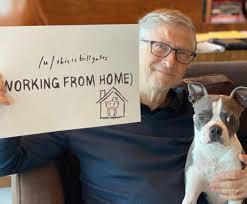 He doesn't think in terms of freedom for others, especially since he has the money to easily pay for getting the freedom he doesn't want others to have.

In fact, it is clear he doesn't want others to have freedom.

He wrote on Tuesday of this week in the Washington Post:

Through my work with the Gates Foundation, I've spoken with experts and leaders in Washington and across the country. It's become clear to me that we must take three steps.

First, we need a consistent nationwide approach to shutting down. Despite urging from public health experts, some states and counties haven't shut down completely. In some states, beaches are still open; in others, restaurants still serve sit-down meals.

What a power freak. First, it is questionable as to whether restaurants should be shut down but why would you want to shut down beaches when there are plenty of indications that vitamin D from the sun can help in warding off viruses?

And as the Washington Times points out:

This — from the guy who practically controls policy at the World Health Organization...