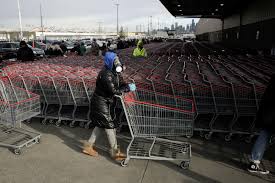 Social Distancing Still on the Increase
Gallup last reported Americans' adherence to the nation's new social distancing norms on Friday, based on data collected via web using the Gallup Panel from March 20-22. Since then:

The percentage avoiding small gatherings, such as with friends and family, has surged 15 percentage points to 83%.

The percentage reporting they are avoiding public places, like stores and restaurants, has increased six points to 78%.

The percentage avoiding mass transportation, including air travel, has leveled off near 90%.

Gallup ceased asking Americans whether they are avoiding crowds after this reached 92% in March 20-22 interviewing.

Since Gallup's original measurement of social distancing, based on March 13-15 interviewing, all societal groups have adopted stricter social distancing practices, including avoiding public places - but certain differences have held constant. As shown in the table below, women, young adults, Democrats and residents of the most densely populated areas tend to be following this recommendation most strictly.

In another indication that Americans are taking social distancing more seriously, an expanding percentage of Americans, now 64% up from 58% last weekend, say they are very likely to comply with a potential public health directive to remain in their homes for 30 days.