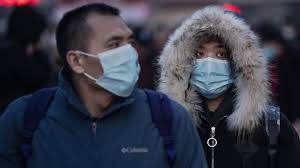 Having lied for the past two months about the severity and the extent of coronavirus pandemic which its virologists started in Wuhan, eager to convey the message that the crisis "under control" just so people return to work, full of hope and enthusiasm, rejoicing at the surge in China's just as fabricated PMI numbers, and willing to work their asses off (with Beijing generously willing to risk everyone's lives as the alternative is a complete collapse in China's economy) earlier today the US finally cracked down on the relentless barrage of Chinese lies, when US intelligence accused China of deliberately lying about its coronavirus figures.

Then, in a miraculous coincidence, just moments later Reuters reported that a county in central China's Henan province announced on Wednesday it had "virtually banned all outbound movement of people, following several cases of coronavirus infection in the area."

According to a post on its social media account, Jia county - which has a population of about 600,000 - said that no one can travel out of Jia county without proper authorization. Additionally, residents are not allowed to leave their homes for work unless they have clearance to do so.

Trump's Hostile Actions Against China Based on Big Lies