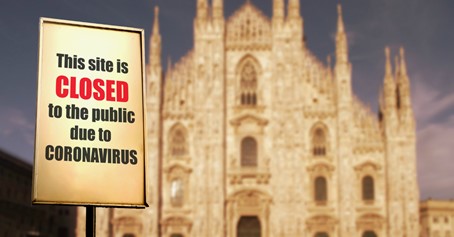 While I always assumed the American "church" would fold at the first sign of persecution, it turns out that many have folded far easier than that.

They didn't have to be beaten, shot, or tortured; they merely had to be commanded by the government to stop meeting; and most squeamishly complied.

The First Amendment has been discarded as nothing more than a quaint footnote to a bygone era. To a time when "patriots" valued their freedom to assemble and worship as they pleased. To a time when they would rather die than give up this freedom. And to a time when a nation was formed with the idea of enshrining this freedom as the law of the land. Sadly, today we are told it is our "patriotic duty" to cancel church services for the sake of the greater good.

Cable news anchors are exempt from such decrees because they're considered to provide an "essential service." Yet pastors are deemed "non-essential" and most Christians seem fine with that. And while it is not surprising to see a secular government make such dictatorial decrees, it is astounding to see how quickly the churches have submitted. Things used to be different in Christian circles. They were certainly different in New Testament times.

Some have said it is the church's duty to "render unto Caesar" as Jesus said to do. The passage in question involves a time when Jesus was asked about whether or not it was lawful for a Jew to pay taxes to Caesar. According to scripture the question was posed by a group who was trying to entrap Jesus and get him arrested. Luke records:

The scribes and the chief priests tried to lay hands on Him that very hour, and they feared the people; for they understood that He spoke this parable against them. So they watched Him, and sent spies who pretended to be righteous, in order that they might catch Him in some statement, so that they could deliver Him to the rule and the authority of the governor. (Luke 20:19-20)

Several things should be noted. First of all, Jesus was in hot water because he PUBLICLY SPOKE AGAINST THE AUTHORITIES. In this case, it was the Jewish "scribes and chief priests" who were not only religious authorities, but also the local governing body for the Jews. All under the authority of Rome. If the "render unto Caesar" argument is followed to it's logical conclusion, then Jesus was blatantly refusing to "submit" to the local "Caesars" (I.e, scribes and chief priests) by continuing to speak publicly against them. Why didn't he submit to the Sanhedrin, since they were the local authorities who governed with Rome's blessing? In fact, Jesus did the opposite.

Secondly, the opponents of Jesus sought to "hand him over the the rule and authority of the governor." Of course this eventually happened, when he was arrested and stood before Pontius Pilate. But why did they want him arrested? What was his crime? Why did they oppose him so vigorously? Because he spoke out against them. Jesus didn't go silently into the night, as many Christians seem willing to do today. Much of Jesus's ministry involved speaking out against corrupt authorities.

When asked the question about Roman taxation, Jesus used a denarius, with Caesar's inscription, as his object lesson. "Render unto Caesar the things that are Caesar's." (Luke 20:25)

Technically, Jesus was not answering a question about paying taxes in general, but rather explaining whether or not it was "lawful" for a Jew to do it; since some Jews saw it as an act of idolatry to grant Caesar such payments. Jesus's answer put the question to rest from a Jewish perspective, in telling them to "render unto Caesar" the taxes he demanded.

The more telling aspect of Jesus's statement is the second half of the verse, which is often overlooked; and seems to be have been largely forgotten by Christians today. Jesus said, "Render unto Caesar the things that are Caesar's, AND TO GOD THE THINGS THAT ARE GOD'S." (Luke 20:25 emphasis added)