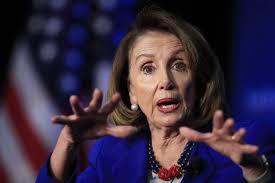 As I know you are too well aware, this is a thoroughly repulsive hypocrite (as a libertarian, I believe in abortion—not infanticide—but I do not claim to be a Roman Catholic like Nancy does) who grew wealthy in office, and who, at eighty, is still willing—no, make that eager—to sacrifice the health and well-being of millions of Americans simply for the sake of raw, brutal power—and the advancement of her neocommunist agenda. Since 1988, the mightily self-righteous Pelosi (which means "hairy" in Italian) has represented what is regarded as the safest district (for Democrats) in America.

But … no. At what could be one of the most depressing moments in America's history (psychologically, if not economically) I'm not about to write a thousand words that will make everybody who reads them (including their author) want to slit their wrists in the bathtub. Besides, strictly speaking, I have always worked from home (thousands of my loyal readers don't know that almost every word I've written was written in my underwear). My wife has always wanted to work from home and now, thank St. Vint—who really did invent the Internet—has finally gotten her wish (except that now she wishes I would put some pants on—that's what three decades of marriage will do for you). My daughter has a job she loves, delivering food, that pays well, gets her fat tips, and is a huge part, in these dire days of "social distancing" of what Rex Stout called "the kindliest of the arts".

To my deep regret, both my physical and occupational therapies have been cancelled for the duration (ever try to use hand-sanitizer when you only have one hand that works?), along with Friday Night karaoke, so there goes any social life I ever had. But, altogether, the three of us Smiths are far better off than most. We have our Little House In The Suburbs, our wonderful kitties Paolo and Strider, plenty of swell things to eat and drink (my wife buys me lobster bisque soup, pre-mixed Margaritas, Guinness, and Chelada), two cars that run, and each other. My daughter has her tall, dark, and handsome (the girls tell me) enamorato, the likely father of my future grandchildren.