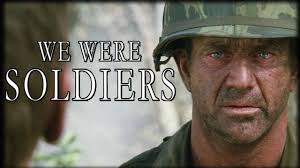 The movie focuses on the very first battle of the Vietnam War — the battle of la Drang — between U.S. forces and North Vietnamese forces in November 1965. Starring Mel Gibson, Madeleine Stowe, Sam Elliott, Greg Kinnear, and Keri Russell, the movie is based on a true story set forth in the book We Were Soldiers Once … and Young by Army Lt. Col. Hal Moore and reporter Joseph L. Gallaway.

After a U.S. base is attacked in South Vietnam, Moore, who is played by Gibson, is ordered to take 400 men and go after the attackers. They are dropped by helicopters in the la Drang valley in the central highlands of South Vietnam. They soon learn from a captured North Vietnamese soldier that they are facing a 4,000 man North Vietnamese army division. All hell breaks loose.

I was particularly struck by the last words of one young U.S. soldier as he lay dying: "I'm glad I died for my country."

Except that he didn't. He didn't die for his country. He died for his government, which was the entity that ordered him to go to Vietnam and intervene in that nation's civil war. His country never ordered him to do anything.