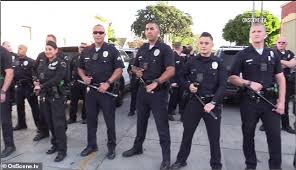 Footage from the incident taken in the Hyde Park area shows the group of around 40 revelers refusing to comply with social distancing rules.

Law enforcement were forced to call for back up as the crowd became 'agitated', a source said. The LAPD said no arrests were made.

In Los Angeles, Mayor Eric Garcetti has instituted a shutdown on a city of nearly 4 million people and threatened uncooperative business owners with power shutoffs and arrest.

By midday Monday, California had more than 6,300 cases and 132 deaths of reported cases, according to a running list by Johns Hopkins University.

The clip begins with groups of women and children shouting at officers, who have formed a line.

Moving forward, the police shift the partygoers away from the scene.

Coronavirus pandemic could be over in the US by November 11: