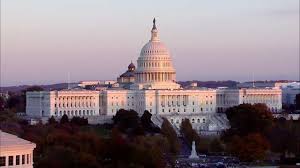 In many cases, the conservatives who backed the $2 trillion bill — the largest economic relief measure in U.S. history — were the very same who raged against the nearly $800 billion economic stimulus package backed by the Obama administration.

But facing the unprecedented threat of a global pandemic — and working under a Republican president who has largely brushed off concerns about debt and deficits — the GOP was willing to overlook an unprecedented flood of taxpayer spending. Leading budget hawk Sen. Pat Toomey, R-Pa., who insisted in 2009 that government cannot spend its way out of a recession, this week joined a unanimous Senate majority that approved what he described as "the biggest government intervention in the economy in the history of the world."

"This is a response to an invasion," he told reporters. "This is the kind of thing you'd have to do if we were at war."

Like other conservatives, he noted that much of the nation's current economic distress was caused by the government's social distancing orders, while the Obama stimulus was in response to a crisis created by the private sector.

Failing to take dramatic action now, Toomey said, "would be a wildly imprudent thing, and it would probably result in such a severe recession — it might very well be a depression — and it could take decades to come out of this."

Negative interest rates could be needed for a 'V' recovery, Fed economist says