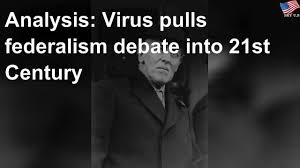 Woodrow Wilson did not address the nation on the subject of the pandemic of 1918-19 a single time. He did not call for Congress to act, and he did not summon the nation to unite. He had another battle to fight in trying to bring World War I to a close, even though the flu killed far more people.

While his posture on the flu seems passive, even reckless, in a modern light, Wilson's approach to war demonstrated an entirely different view of federal power than President Donald Trump's approach to the current pandemic. Wilson fully exploited the authority of the federal government, compelling rationing, propaganda and nationalizing the railroads, all directed at defeating Germany, not the virus.

The country, after all, was already accustomed to 100,000 deaths a year from the flu. There was a limited public health infrastructure. Use of vaccines remained uncommon, and therapies were often primitive. It wasn't that Wilson was restrained about using federal power; he simply had less precedent to lean on, and a much higher priority in the war effort.