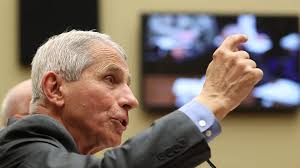 On the way to establishing the fact that the Democratic Party at the local level is involved in a concerted and uniform effort to tear down the Constitution, something else has jumped to the front of the line.
The medical mouthpiece of the New World Order, Dr. Anthony Fauci, has reared his ugly head is he is, by far and away the most dangerous figure in America today.

First, let's establish who Fauci is. As Glenn Beck recently pointed out, he wrote what amounts to love letters to Hillary during the 2016 campaign. He is also partnered with Bill Gates, which goes hand in hand with the fact that CDC is the nation's Vaccine Central dedicataed to the spread of vaccines, of all types. This has become the main mission of this rogue organization.

Fauci appeared to have made a concession speech and was apparently admitting that his projection that COVID-19 was so much more deadly than the flu was self-admittedly false. I admit that for 24 hours I was taken in by his deception. Let's take a look at research that he co-authored in the New England Journal of Medicine.

Below are the key excerpts from the so called study:

If one assumes that the number of asymptomatic or minimally symptomatic cases is several times as high as the number of reported cases, the case fatality rate may be considerably less than 1%. This suggests that the overall clinical consequences of Covid-19 may ultimately be more akin to those of a severe seasonal influenza (which has a case fatality rate of approximately 0.1%) or a pandemic influenza (similar to those in 1957 and 1968) rather than a disease similar to SARS or MERS, which have had case fatality rates of 9 to 10% and 36%, respectively.