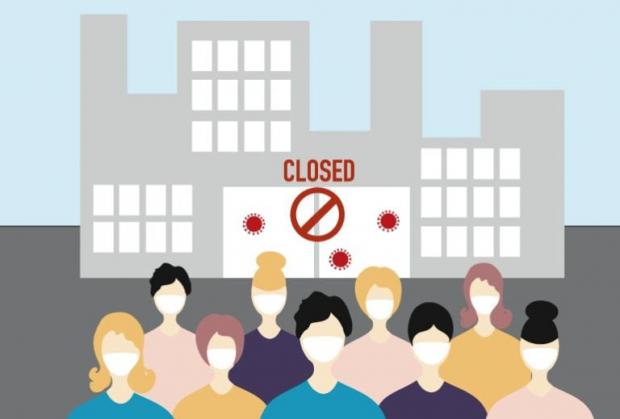 You closed all 200 businesses in beautiful, historic Park City, and most of 7,014 companies registered in the county.

My friends who own a yoga studio, a medical clinic, a car wash, a ski shop, a mechanic shop, and a restaurant, are all sitting at home, terrified, wondering how they'll buy food and pay the bills, in the next 5 weeks and beyond.

You, Summit County's Health Officer Richard Bullough, PhD and council members, will always have the dubious distinction as the people accountable for making Park City a Depression-devastated ghost town.

Of course, you're in good company. In fact, hundreds of other counties made foolish decisions that will affect the long-term legacy of their leaders, and the future of business in those counties, as well.

Governors Cuomo of New York2 and Newsom of California3 shut down most commerce and sentenced tens of millions to long-term unemployment and uncertainty, around the same time you did.

Cuomo is now admitting his 2-month shut down of New York was an overreaction, and a bad idea.4

On Tuesday, India's Prime Minister Narendra Modi sent 1.4 billion of the world's most vulnerable people home for 21 days — their meager sources of income gone — telling them, "Forget what it feels like to leave your homes."5

And that's not all: Los Angeles Mayor Eric Garcetti wins the prize on March 26 for sentencing 18.79 million people in the Los Angeles area for the longest quarantine of anyone, worldwide. Two full months of ordered isolation — all due to 650 cases of COVID19 (and no recorded deaths) on that date.6

A great deal of information has come out in the past week that shows that those leaders who destroyed our economy will find themselves on the wrong side of history.7

You were an "early adopter" of the quarantine approach to combating this virus; an early adopter in creating mass layoffs and now-defunct businesses.

Let me review some data points, each of which would have been easy to learn before your knee-jerk reaction destroyed many lives for the indefinite future.

1. I was in the Park City Hospital on March 25, the very hour that KSL reported our county had an outbreak the proportions of New York City (per capita)  — and 20 times more infected, per capita, than Salt Lake City.8

Did you contact our two hospitals in the county, to learn that not only were they not full of COVID19 patients–they didn't actually have any?

Despite the sensational headline, there wasn't a single patient in the ER. Not in the ER waiting room, and not in the general hospital waiting room, either. Where was the pandemonium, the overcrowded E.R., the huge outbreak? We are a small county, and besides the tiny Heber hospital, there is no other hospital besides Park City.

The eight hospital employees I interacted with during the hour I spent trying to get my simple procedure done (all of them wearing elaborate helmets and face shields) passed me from the lab, to the E.R., to the lab again. With the Red Cross shut down nationwide, I just medically needed to remove some of my iron-rich blood.

I finally left the hospital without the simple treatment I needed (this was actually my second trip there in a week, with the same results, and the same completely empty waiting rooms). I headed to Heber, only to find the ER in Heber — Summit County's other hospital — also completely empty.

The KSL story about the "outbreak" in Park City being the same, per capita, as New York City, released by KSL, was published, strangely, the same day that KSL also published a story that only 348 cases total have been diagnosed in the entire state of Utah, and that new diagnoses were now decreasing.9

If Summit County, with its completely empty ICU's and ER's, had the same per-capita infection rate as New York City — I have to wonder if media reporting in New York City is also inflated.

While it is clear that intensive medicine is not built and staffed for the high point of an outbreak in densely populated cities with a high number of elderly, the media COVID19 media blitz is unprecedented in history, and has taken on epidemic hysteria worse than the virus itself (which seems to be on the decline now, worldwide, with a kill rate of not even 1% of 1% of the estimated 2.2 million dead).10,11

2. China has released its statistics, dramatically downgrading the death rate from its COVID19 outbreak. This study (pending peer review) estimates the death rate of those contracting the virus — in a country where most people smoke, and the air quality is terrible — to be between 0.04 to 0.12.12 This is 33 times lower than the media headlines of up 4 percent that dominated panic-spreading headlines for weeks.

That means the highest death rate the COVID19 virus could have achieved (touted in over 1.5 billion media stories to be extremely deadly) is .12% — and most of that small number of fatalities were people who had already outlived China's average age.

Here in the U.S., it is simple math that any epidemiologist should know, that the only people being tracked as the outbreak happens are the ones who were tested.13 But as with every pandemic since pandemics have been studied, there are 10 to 20 times more infected people who were never tested. And, every one of them is a survivor. They must be factored into the mortality statistics.

While China's outbreak was contained, and data was readily available that the death rate was orders of magnitude lower than the media reported, you, Summit County, sentenced thousands of the businesses you ordered to close into extinction.14 (When you extended the existing 10-day order to May 1 — adding another 5 weeks of unemployment and shutdown.)

When those numbers are estimated and factored in, it is becoming clear that U.S. statistics will be likely two-tenths of one percent, at most. (No more deadly than this year's flu, which is also 0.02%.)

3A. Emerging evidence shows that COVID19 may not be significantly more communicable than other infectious illnesses, either.15 Data is emerging that up to 80 percent false positives result in some test groups.16

Deborah Birx, MD, global health official, admitted 16 hours ago that the outbreak was orders of magnitude lower than predicted, and that the vast majority of ER's and ventilators sit unused, all over the world.17

3B. A study from Iceland shows that about 50 percent of positive COVID19 cases have no symptoms, and 50 percent show moderate cold symptoms.18

3C. Washington State, in the week Summit County expanded our quarantine and extended it by 5 weeks, showed that of over 30,000 COVID19 tests, only 7% were positive!19 In fact, Washington State intel shows that the death rate, based on real data, is about 0.3. Again, orders of magnitude lower than news media reports.

4. Both South Korea and China have completed the typical "bell curve" of the outbreak.20 Most days in the last week, both countries have reported 0 new cases. (I work with a manufacturing company in the Wuhan, and they worked straight through the outbreak–so people saying that China shut its economy down, and that's how they contained their outbreak, are wrong.) This is what the bell curve of the epidemic looks like for China and South Korea, neither of whom shut down their economies, but rather, employed reasonable and rational containment strategies:

Unlike Bullough and council members, who inflicted great harm on my business and many others, South Korea achieved total containment of this virus without destroying the livelihood of millions of people.21 Containment strategies are important, but decisions based on bad data are going to destroy Summit County.