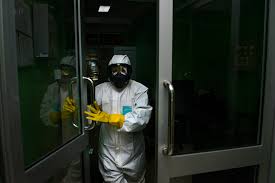 As these words are written, governors throughout America have issued orders (without resort to any statutes or legislation) shuttering thousands of businesses and terminating tens of millions of workers.  Some 70 million Americans are now imprisoned in their residences, needing government permission even to walk to a park.  The U.S. Justice Department is calling openly calling for indefinite detentions and a suspension of habeas corpus.

The United States is under the strictest level of martial law in history.  All borders are sealed.  Tanks and armored personnel carriers now roll through the streets of New York City, San Diego and other cities.

All of this is in response to COVID-19, the "Coronavirus," a disease whose mortality statistics are almost certainly far below three percent for all who contract it.

The sheer folly and carnage of government overreaction to this threat will go down as unparalleled in American history.  Social science has established few correlations stronger than those linking high unemployment rates with higher rates of suicide, homicide, overdoses, alcoholism, and mental illness.  Studies have found that every 1 percent increase in unemployment likely increases violent crime by 14.3 per 100,000 residents, increases property crime by 1.8 percent and increases opioid death rates by 3.6 percent.  A 2015 study found that the unemployment associated with the economic crises of 2008 likely contributed to some 5,000 excess suicides in the following years.