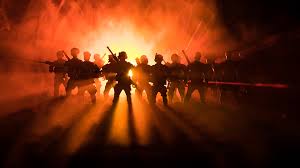 On February 27, 1933, Hitler was struck by another crisis, arguably one of equal gravity. A group of communists fire-bombed the German Reichstag, which was Germany's national legislative body, essentially equivalent to the U.S. Congress.

Thus, within in a month of having assumed office, Hitler was confronted with three major simultaneous crises: an economic crisis, a communist crisis, and a terrorism crisis.

Americans today should be able to relate to what Hitler was facing.

FDR and the Great Depression

Every American is well-versed in the economic emergency known as the Great Depression, when President Franklin Roosevelt effected a massive transformation of American life to deal with the economic crisis.

A good example, of course, was FDR's nationalization of gold coins, which pursuant to the Constitution, had been the official money of the American people for more than a century. With the help of the Federal Reserve, which had been established in 1913, FDR permanently converted America's monetary system into a paper-money system.