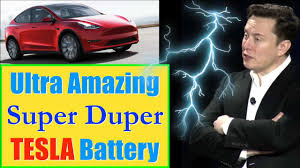 Tesla has been hard at work developing new, game-changing batteries and the results will be shown at Tesla Battery Day. Million-mile life? Super cheap? Capable of charging faster than any battery out there? Extremely light?

The possibilities of what Tesla will reveal are basically endless, but this video seems to suggest that Tesla will not debut a super battery that works best in all applications, but rather a variety of new batteries that are best suited for their particular use.

We expect to see Tesla reveal a battery that offers it all in regards to energy density, extremely fast-charging capabilities and something that is easy to produce in volume to drive down costs.

Tesla's secret battery project is called Roadrunner and it promises cheap and energy-dense batteries that will extend vehicle range, reduce car prices and possibly jolt Tesla to new highs. There's talk that a vehicle equipped with these batteries may even be revealed at Tesla's Battery Day event this April.

It's believed that Maxwell Technologies is involved with this project and that Tesla battery expert Jeff Dahn is heading the team. Tesla's work on these cells is internal, without assistance from Panasonic. However, Tesla's battery guru Jeff Dahn (the man behind the million-mile battery) is said to be involved in the project.