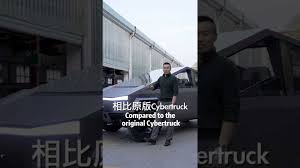 This one-of-a-kind homemade Tesla Cybertruck comes our way via China where the builder claims Lamborghini styling cues are present throughout the Cybertruck. Do you agree? Watch the video for more info.

We've seen no shortage of Tesla Cybertruck clones in all shapes and forms. From working vehicles you can actually drive on the streets, to remote-controlled Cybertruck and even countless 3-D printed Cybertruck items, like the world's first Cybertruck shoes, for example.

The Cybertruck craze has now reached China where we see a working Cybertruck that actually appears to look quite realistic. The build took some tow months, as the video states. And, despite the poor video format, this Cybertruck seems to look the most realistic of any working mock-up we've seen thus far.

In the video, some of the Lamborghini-inspired modifications are explained. Basically, some of the Cybertruck's straight lines were modified a bit to add some additional detail to the design. The hood, for example, features some extra crease lines. There are some additional inverted trapezoid elements too, again linked to Lamborghini's design style.

The carbon fiber wheel well treatment is rather slick too. But the highlight of the build is the automatically folding rear tailgate. With the push of a button, it lowers down for loading items.